The Scala book is now out. Bill wrote a great article about the process:

It's been a long two years, filled with much toil and struggle, but at last we can hold the physical book in our hands.

A little Christmas tree from Ma

Check out the little Christmas tree my mother sent us.  You really can send anything through the mail these days.  It's a great gift, too, because we've been too busy to go get our usual tree out of storage. 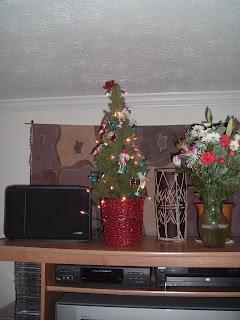 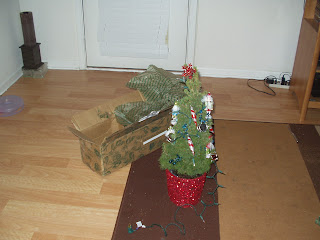 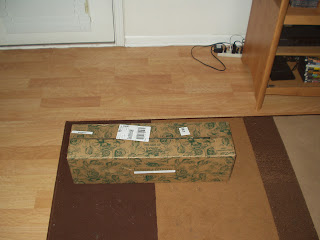 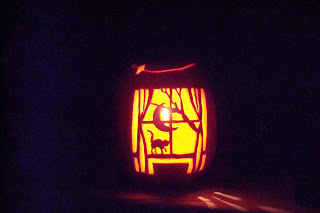 Fay and I actually carved a pumpkin this year.  Check it out!  I never would have tried for something so complicated.  She was right, though.  If you draw it out first--using a template in our case--and then cut it using narrow knives instead of normal ones, it works out pretty well.
Posted by Lex Spoon at 10:08 AM No comments:

OOPSLA was in Nashville this year.  The streets were filled with country music, and the barbecue was excellent.  The conference itself was a little quieter than usual, but nonetheless it was great to talk with a few dozen folks about what they're up to regarding the latest in object-oriented languages.
However much we like to think of human knowledge progressing in the class room from expert to neophyte, the reality is that there is quite a lot of lore that is not in the text books.  It is passed by word of mouth, as practitioners and researchers share with each other their struggles and their solutions.  I work on an AJAX development toolkit, so it was great to talk to a few people actually developing AJAX apps.  Our team is starting to build software on the Eclipse platform,  so it was helpful to talk to other people who have experience with it.
In the other direction, it clarified my own work for me when I had to explain it to others.  What we call "runAsync" and "code splitting" in house can be most easily explained as "incremental download of application code".  It allows AJAX programs to start up before all their code downloads, and as the program runs it downloads the rest of its code.  If their eyes haven't glazed over yet, I can then explain that our approach differs from others in that we use control-flow analysis to decide what part of the program goes in the initial download.  Competitors tend to use a module system, but with that approach it's unclear how to download just a part of a module you are using initially versus downloading the whole thing.
There's not much interesting to share in these discussions, though.  More interestingly, here are my picks for the most interesting papers of the conference.
"Analyzing the Performance of Code-copying Virtual Machines", Prokopski and Verbrugge.
I was really impressed by the amount of observation and analysis these guys did.  Most of the time when a research backs a technique, they provide one or two case studies that include no surprises.  It's more of a proof that they actually did some amount of work on the technique, rather than a real experiment designed to increase our understanding of the subject.  Prokopski and Verbrugge tried their technique on three virtual machines, and it worked well on two but poorly on one.  It's interesting to picture the more common scenario where the researcher tries a technique on one virtual machine and then publishes the results.  The results from any one of these modified virtual machines would have given a misleading understanding of the technique as a whole.  Indeed, I wonder how many research papers have a basically wrong result, but nobody knows because the empirical evidence is skimpy?
"Sound and Extensible Renaming for Java", Schafer, Ekman, and de Moor.
The title is about Java, but the technique is general.  The problem is how to do renaming refactorings, which are one of the most frequent refactorings people do.  Their technique uses an inverse of the usual name-lookup function that they call "access".  Whereas the lookup function takes a name and a scope and finds the variable that is referred to, access takes a variable and a scope and computes a name (or qualified name) that can be used to access the variable.  The main downside is that they did not justify the technique formally.  It looks like a deep, general technique that deserves study both in minimal calculi and in a number of languages.  I hope they or someone does so.
"QVM: An Efficient Runtime for Detecting Defects in Deploymed Systems", Arnold, Vechev, and Yahav.
There is a trade-off in software that the more sanity checking it does as it runs, the slower the program tends to run.  Programmers have to decide what things to bother checking for with assertions, and they have to decide in what contexts to enable assertions at all. QVM makes the trade off less stark by making the level of assertion checking a continuous knob instead of a simple on/off switch. When you run the program, you specify how much CPU time you want to spend on assertion checking, and the infrastructure will turn assertions on and off as it tries to target that amount of CPU time.  Moreover, it doesn't simply turn assertions on and off at a global level, but it makes some effort to spread out the assertions that it uses.  If you have one assert that is in a frequently used code path, and one that is in a rarely used code path, it will throttle the frequent one more than the rarely-used one in order to increase the likelihood of finding bugs.  All in all it's a clever system, and I hope it becomes the norm for VMs of the future.
"Verifying Correct Usage of Atomic Blocks with Typestate", Beckman, Bierhoff, and Aldrich.
This paper addresses program verification based on type state and when programs are concurrent.  I don't know the area well, but they choose five kinds of access permissions that a variable might have.  An access permission talks about the kind of aliasing going on with the referred-to object.  The options are: unique (this is the only reference in the program), full (this reference is the only one used to modify the object), immutable (the underlying object never changes), pure (the underlying object might change, but not via this reference), share (anything goes).  I don't know if program verification per se is going to become widely practical any time soon, but labels like these are helpful in figuring out how to better structure and document programs.  If you are writing concurrent software in a language fortunate enough to have software transactional memory available, these labels suggest what you should document when you write the comments for a field pointing to a shared object.
Posted by Lex Spoon at 5:06 AM 3 comments:

The best form of flattery

I applaud the Pragmatic Programmers for their fine choice of topic for one of their upcoming books:

Scala is an exciting, modern, multi-paradigm language for the JVM. You can use it to write traditional, imperative, object-oriented code. But you can also leverage its higher level of abstraction to take full advantage of modern, multicore systems. Programming Scala will show you how to use this powerful functional programming language to create highly scalable, highly concurrent applications on the Java Platform.

That sounds like the domain of scientific computing. To contrast, Programming in Scala has a more general focus, as its title would suggest.
Posted by Lex Spoon at 5:53 AM No comments:

I'm back from a lovely week with the family at the beach.  It was also my birthday, and Carrie was kind enough to give me a hermit crab.  She figured that since I had two hermit crabs growing up, I needed one again.  Here's what he looks like all shelled up: 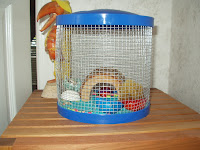 Do you see him, back under the log thing?  He's hard to see because he's all curled up.  I just redid his cage and he's traumatized.  Fay and I made a Petsmart trip to get him a new shell and see if they have hermit crab food.  It turns out they have hermit crab food, and shells, and a thousand other hermit crab things besides.  We brought back:
I hope he likes his new home.  We're going to try keeping him in the bathroom, where he can get misted once a day and where he'll have good company with the lobster statue you see behind him.  With our luck, now that we got his crib all spiffed up, he'll croak tomorrow.
Posted by Lex Spoon at 8:35 AM No comments:

Check out the  cute love story by a friend of mine on YouTube:
http://www.youtube.com/watch?v=INj-cJKf9VU
Not just people fall in love you know.  My favorite is the way the protagonist spends his spare time.  He watches YouTube.
Posted by Lex Spoon at 5:48 PM No comments: