Google Wave was announced yesterday.  If you haven't yet, check it out.  It provides a hosted messaging service that, with a few simple features, supports all of: email, instant messaging, and collaborative document editing.  It also has an open extension mechanism, so it can be used as a substrate for specialized applications, like blogging, photo album sharing, and issue tracking.
I haven't perused all the web information myself, but I hear that the Tech Crunch article is quite good.  Also, if you have some time, the demo is mind-blowing.
Features and vision aside, I must say they made an excellent choice in implementation technology.
Posted by Unknown at 10:52 AM No comments:

The new Star Trek movie is just great.  If you liked the original series, go see this.  If you liked making fun of the original series, still go see it.  Just be careful what you say to your Trekkie friends, because they might bite.
The new movie has all the old characters back, but this time with more life and before their rough edges were sanded off.  McCoy is more paranoid than ever.  Spock is more infatuated with logic than ever, yet less equipped due to being just out of college.  Scotty is crazier and drunker than ever.
Somehow they all come off as much less stiff this time around.  In the original series, you could almost see the rod going up their backs--whooooaaa, Trekkies.... take it easy.  They looked like they could put on a snappy 50s-era suit and be right at home carrying a briefcase and shaking hands.  This time, they have big gestures.  They move around.  When Scotty is needed in engineering, or Chekov is needed in the transporter room, they RUN there.  Except Spock.  He's an uptight nerd with pursed lips and a bad poker face, and it stands out wonderfully as the guy you don't want at a party.  My favorite?  The security guards are no longer polite.  You meet them as they start a bar brawl and beat the crap out of someone you like.  Later, when the stuff hits the fan, you're glad they are there.
The fight scenes are upgraded, too.  Kirk still has his signature endless haymakers--gut and face and gut and face.  The others have branched out, though.  Best is that one of them fights with a sword.  All movies should have ninjas or samurais, if not both, and now Star Trek has a futuristic samurai.
I'll admit that the movie is a rather strong cheese, difficult at times to get down.  I love that they say all their old lines, straight, but those lines have been jokes for so long that it's hard to stay in the movie when they say them.  Many scenes are way beyond believable, and you just have to go with it.  Chance encounters, gauntlets of fire, diseases with effects that aren't physically possible--they're all there, and you have to simply enjoy the cheese.
Overall, I give it a hearty thumbs up.  Go see Star Trek if you haven't already.
Posted by Lex Spoon at 8:04 AM 1 comment:

One cat, a chihuahua, and a turtle

After a sudden decline, our cat Einstein had to be put to sleep after fifteen years.  He had been stable but slow-moving for months.  Last week, soon after a slight change in his meds, he hit a hard enough bump in the road that he just stopped eating.
Deciding how long to give him before letting him go was an awfully hard decision.  This cat has been with Fay through multiple life phases.  We wanted to give him every chance possible, but not to draw things out and make him miserable.  We did our best.
Here he is playing with the baby cat: 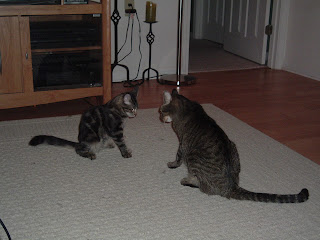 Here he is concentrating on something he heard outside: 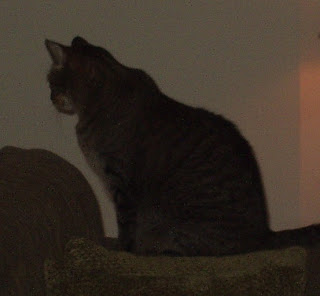